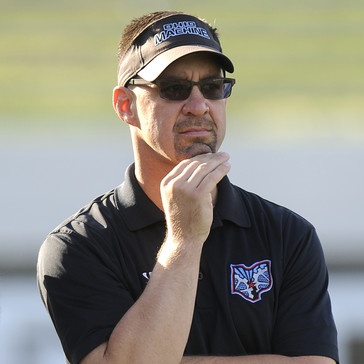 In 2017 Davis led the Ohio Machine to the playoffs for the 4th straight appearance and a Major League Lacrosse championship bringing the Steinfeld Trophy to Ohio for the very first time. In 2016, Davis led the Machine to an 8-6 record and a spot in the MLL Championship Semi-finals. After a win against Charlotte in the semi-final, the Machine faced off against the Denver Outlaws for the Championship. Unfortunately, after a back and forth battle, the Machine lost to Denver. In 2014, Davis led the Machine to an 8-6 regular-season record and guided the team to its first-ever playoff appearance. The Machine’s six-game improvement over its 2013 record is tied for the largest single-season turnaround in Major League Lacrosse history. Under Davis, the Machine posted the top-ranked offense in Major League Lacrosse in 2014. The team ended the regular season with five straight wins, which tied for the longest winning streak in MLL that season. On offense, the Machine boasted four players that scored 27 or more goals, a feat that hadn’t been accomplished in the league since the 2004 season. Davis was the runner-up for the Brine Coach of the Year award in 2014 and 2015. Prior to joining the Machine full-time, Davis was the head boy’s lacrosse coach and associate athletic director at Archbishop Spalding High School (Md.). Davis took over at Archbishop Spalding after building the men’s lacrosse program at Robert Morris University over the span of eight seasons as the program’s first-ever head coach. In 2011 Davis led RMU to its first USILA top 20 rankings. Robert Morris led the NCAA in scoring offense for two straight seasons under Davis. Prior to Robert Morris, Davis helped start the Wheeling Jesuit men’s lacrosse program and guided the Cardinals to a USILA No. 10 national ranking in 2003. In addition to his responsibilities as the head coach, Davis is instrumental in expanding the Machine’s ticket sales and community relations efforts. In addition to handling the Ohio Machine, Davis will also be serving as the Vice President of Community Relations, heading COYLL (Central Ohio Youth Lacrosse League). Davis took over COYLL in 2016 and is excited to continue his improvement to the game of lacrosse throughout the Midwest.