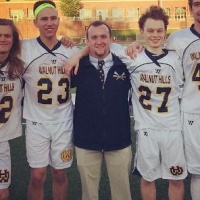 Conor Peck is a native of Cincinnati, Ohio, and current Head Coach of the Walnut Hills High School Men’s Lacrosse program. Conor was a Varsity Captain at Turpin High School in Cincinnati, where he played for 4 years, before graduating in 2012.

In his spare time, Conor enjoys golfing, reading, traveling, and following / being around all sports.